My daughter Carol lost her leg in a motorcycle accident in 1978. At the time, Mrs. Schuller and I were in Korea. On the long trip back to Iowa, I searched for the right thing to say. What would my first words to Carol be?

When we arrived at the hospital, I was shocked. Carol lay in her bed in intensive care, her body bruised, broken, and disfigured. But her spirits were whole and healthy. Immediately she solved the problem of what to say by speaking first: “I know why it happened, Dad. God wants to use me to help others who have been hurt.”

It was this spirit that carried her through seven months of hospitalization, intravenous feedings, and consequent collapsed veins. This positive attitude gave her the courage to fight a raging infection that threatened her life and to hang on until a new drug was released by the FDA. (It was the right drug at the right time – a real miracle.) It was that same positive attitude that helped Carol make the transition from hospital patient to a “handicapped” member of a family and school – and to feel normal and whole again.

The last picture we have of Carol with both legs is one taken when she was in her softball uniform. The athlete of the family, Carol loves to play softball. The summer after her accident, she shocked me by saying, “Dad, I’m going to sign up for softball again this year.”

“That’s great,” I responded, not wanting to discourage her.

At that time, Carol’s artificial leg was attached just below the knee, which was so stiff she could barely bend it at a thirty-degree angle. She walked very stiffly; running was out of the question. However, I took her to the local school where all the parents were lining up with their daughters to register for the girls’ softball team. Carol signed up and went to check out her uniform.

As she swung her stiff plastic leg into the car and rested her jersey, socks, and cap in her lap, I turned to her and said, “Carol, how do you expect to play ball if you can’t run?” 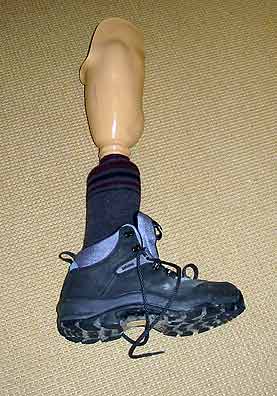 With flashing eyes, she snapped back, “I’ve got that all figured out, Dad! When you hit home runs, you don’t have to run.”

My daughter is tough. She’s a survivor. She hit enough home runs that season to justify her presence on the team!

Carol inspired everyone with her tenacity, too. She had six surgeries after that first amputation. Later, she took up skiing and won a gold medal in the qualifying races that admitted her to that elite corps of skiers participating in the National Ski Championships. In March 1983, she pulled her goggles on and took her place among the champions of her country – at the young age of eighteen! Yes, she still walked with a limp. She drew curious looks from strangers. But her positive attitude and determination helped her even with that.

Several years ago, our family was privileged to be guests of the American-Hawaiian Steamship Company on a one-week cruise of the Hawaiian Islands. It was absolutely beautiful. During the trip, Carol was not in the least ashamed to be seen in shorts or swimming attire although her artificial leg covered her stump to just below the hip. But she was very conscious of the fact that people looked at her out of the corners of their eyes and wondered what had happened to her.

On this cruise, it was customary on the last night to have a talent show in which the passengers participated. Carol, then seventeen years old, surprised us by saying, “I’m going to be in the talent show tonight.” Now, Carol doesn’t sing, and of course she doesn’t dance. So, naturally, I was curious as to what she would do.

Friday night, my wife and I sat in the lounge along with six hundred other people. The stage was set in the big glorified cocktail lounge. As you can imagine, it was a very secular scene. The first acts performed were typical of amateur talent shows. Then it was Carol’s turn.

She came on stage wearing neither shorts nor Hawaiian garb, but a full-length dress. She looked beautiful. Walking up to the microphone, she said, “I really don’t know what talent is, but I thought this would be a good chance for me to give what I think I owe you all – an explanation. I know you’ve been looking at me all week, wondering about my fake leg. I thought I should tell you what happened.

“I was in a motorcycle accident. I almost died, but the doctors kept giving me blood, and my pulse came back. They amputated my leg below the knee, and later, they amputated through the knee. I spent seven months in the hospital – seven months with intravenous antibiotics to fight infection.”

She paused a moment, then continued. “If I’ve one talent, it’s this: During that time, my faith became very real to me.”

Suddenly a hush swept over the lounge. The waitresses stopped serving drinks. The glasses stopped clinking. Every eye was focused on this tall seventeen-year-old blonde.

She said, “I look at you girls who walk without a limp, and I wish I could walk that way. I can’t, but this is what I’ve learned, and I want to leave it with you: It’s not how you walk that counts, but who walks with you and with whom you walk.”

Then she paused and said, “I’d like to sing a song about my friend, my Lord.” And she sang:

“Thank you.” And she stepped down.

There was not a dry eye, not a life that wasn’t touched that night.

By holding on, digging in, and making the most of what happened to her, Carol taught me one of the greatest lessons I’ve ever learned:


When tough times come, we need to take tough action, to hold on until the tide turns for the better, to tenaciously dig in and bloom where we are planted, and to inspire people with our cheerful and positive attitude. In the process, other people will be stimulated to choose noble and positive outlooks for their lives too.

“Be of good courage, and he shall strengthen your heart, all ye that hope in the LORD.”

“He who loses wealth loses much; he who loses a friend loses more; but he that loses his courage loses all.”
~Miguel de Cervantes