Home All Blogs List Top 4 Women in the world, ruling the roost in a Man’s World

Top 4 Women in the world, ruling the roost in a Man’s World

Top 4 Women in the world, ruling the roost in a Man’s World

Politics and ruling the world is a job most people attribute to men. However, with the passage of time, things have changed. People are now more aware of their rights and responsibilities to their country and to their people. This has meant that like other fields of society, the presence of women in politics around the world has seen a drastic rise. Some of the leading personalities calling the shots in the world are women. Whether it is the International Monetary Fund, the US presidential race or the post of Prime Minister of the United Kingdom, women have risen to the very top of the world’s power game.

This article takes a look at five of the leading women ruling the rust in a man’s world.

·        Theresa May— Prime Minister of the United Kingdom

The second female prime minister to grace the United Kingdom, Theresa May has taken the reigns of the United Kingdom at a time when the country is facing an economic crisis riding the back of the  shock from Brexit result. May is no stranger to power; she held the post of Home Secretary under her predecessor David Cameron.  She is believed to have hoped to become the first female prime minister of the country, only to be tipped to the spot by another fellow conservative, Margaret Thatcher.

Christine Lagarde has only recently been re-elected to her role as the Managing Director of the International Monetary Fund. The IMF is one of the leading financial institutions in the world and when Ms. Lagarde had taken over the world was facing a financial crisis. Under her stewardship the IMF has been able to add countries such as UK, Russia and China to its fiscal discipline model. 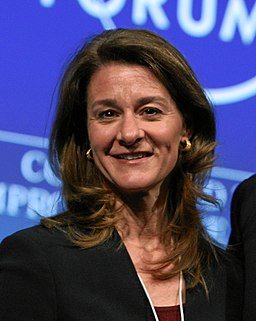 Back in the day, all the notable philanthropists in the world were men. It was in those times that Melinda Gates broke barriers and changed the world of philanthropy forever. She heads one of the biggest philanthropy organizations with her husband Bill Gates and is currently leading the fight against Polio the world over.

·        Queen Elizabeth—Head of the Common Wealth and Ruler of UK

In a world where monarchs and rulers are called Kings, the UK has been ruled by a Queen for a very long time. Queen Elizabeth took the throne after the death of her father and from a tender age has nurtured her people in a way, that she still commands loyalty and love as one of the most popular monarchs ruling anywhere in the world.

A Selection of Strong Women Quotes

“It is better to be looked over than overlooked.”  ~ Mae West

“For mad I may be, but I will never be convenient.”  ~ Jennifer Donnelly, Revolution

“She made broken look beautiful
and strong look invincible.
She walked with the Universe
on her shoulders and made it
look like a pair of wings.”
~ Ariana Dancu

“A strong woman builds her own world. She is one who is wise enough to know that it will attract the man she will gladly share it with.” ~ Ellen J. Barrier, How to Trust God When All Other Resources Have Failed

“I’ve often thought it unfair that women are expected to stay at home when there’s a fight to be won. If a
woman has the strength to bear a child, she can swing a sword as well as any man.” ~ Karen Hawkins, How to Abduct a Highland Lord