The Milky Way Galaxy Has Thousands of Alien Stars

We’re on our way to kill some galaxies, but long before that happens, we’re already eating little chunks of them.

That’s the conclusion of a new pair of papers published Dec. 5 and Dec. 15 last year in The Astrophysical Journal. Researchers found a few thousand strange young stars at the edge of our galaxy, the Milky Way, and concluded that these had formed from material bitten off of the Large and Small Magellanic clouds, a pair of dwarf galaxies that the Milky Way will eventually devour.

The stars stood out in their distant corner of the Milky Way because that region isn’t producing many new stars these days. Unlike at the livelier, denser galactic center, most of the available fuel in the far reaches has already been used up. But analysis showed that these stars were relatively young.

“[This region is] really, really far away,” Adrian Price-Whelan, a research fellow at the Flatiron Institute’s Center for Computational Astrophysics in New York City and lead author of the Dec. 5 paper, said in a statement. “It’s farther than any known young stars in the Milky Way, which are typically in the disk. So, right away, I was like, ‘Holy smokes, what is this?'”

Further analysis showed that the stars seem to be made of unusual ingredients given their segment of the galaxy. The bands of light that reached Earth suggested that at least the 27 brightest stars in the cluster had unusually low metal content, indicating that the material that produced them came from outside the Milky Way. 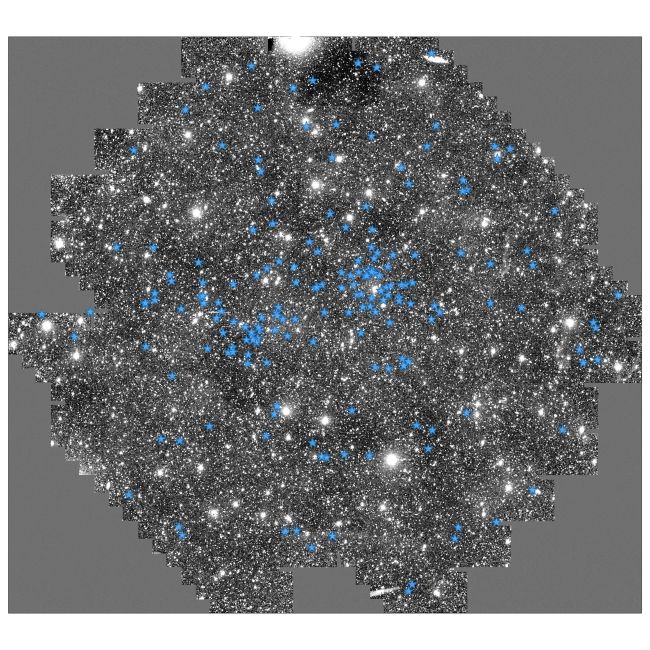 An image highlights the locations of the new stars in blue. (Image credit: A. Price-Whelan)

The likeliest culprit, according to the second paper: the leading arm of the Magellanic Stream, a cloud of gas extending from the Magellanic Clouds toward the Milky Way that isn’t dense enough with gas to produce stars on its own.

What likely happened, the researchers concluded, is that gas from the stream at some point passed through the Milky Way, creating ram pressure (a type of shock wave) as the streaming gas collided with native Milky Way gas. That ram pressure, combined with the Milky Way’s gravity, compressed some of the Magellanic Stream gas enough that it clumped together under its own gravity. Once that happened, some of the clumps of gas got dense enough to form stars, leading to the unlikely presence of young, low-metal stars in the region.

This finding is a big deal, the researchers said, because it could help scientists figure out exactly where the Magellanic Stream is located in space. Most of the methods researchers use to figure out the distance between a star or galaxy and Earth don’t work as well for loose clouds of gas, so researchers need landmarks to locate these objects. Based on these newfound stars, the researchers concluded that the stream is about 90,000 light-years from the Milky Way, closer than expected.

“If the Magellanic Stream is closer, especially the leading arm closest to our galaxy, then it’s likely to be incorporated into the Milky Way sooner than the current model predicts,” David Nidever, an assistant professor of physics at Montana State University and co-author of the Dec. 5 paper, said in the statement.

This new data will help astronomers build better models of the Magellanic Clouds and Stream, to figure out where the system will go in the future and how it moved in the past, the researchers said. And that’s important for understanding the future of the Milky Way.

“Eventually, that gas will turn into new stars in the Milky Way’s disk,” Nidever said. “Right now, our galaxy is using up gas faster than it’s being replenished. This extra gas coming in will help us replenish that reservoir and make sure that our galaxy continues to thrive and form new stars.”