Home All Blogs List In times of change, Learners will inherit the earth

In times of change, Learners will inherit the earth 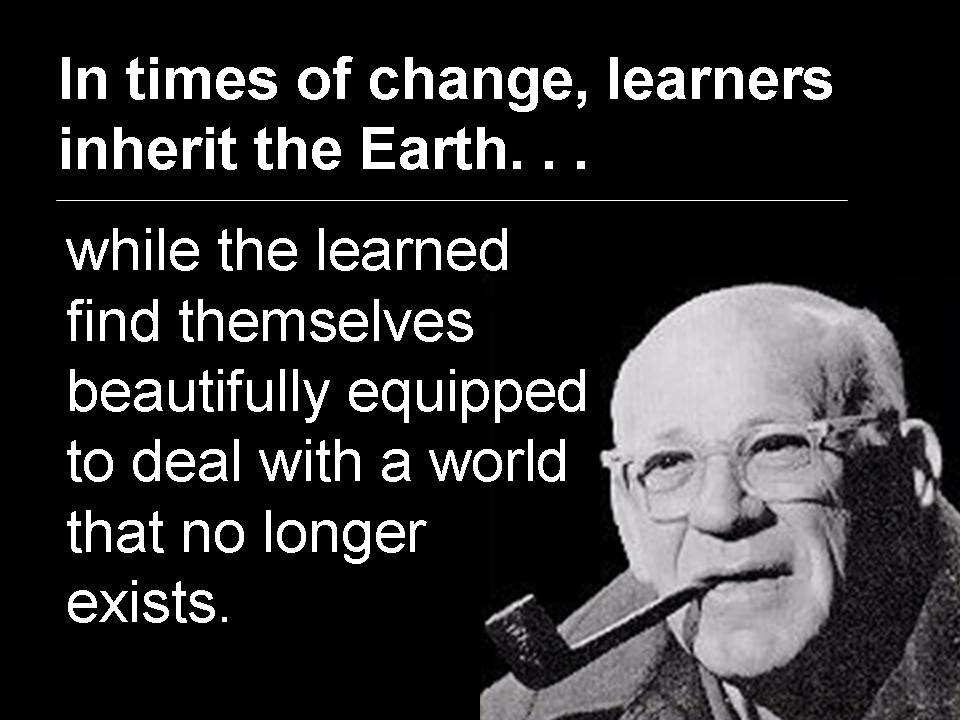 In times of change, Learners will inherit the earth

In today’s world, it is vitally important that you see the truth in Eric Hoffer’s statement. The win or loss, which is waiting in the wings for every person, is enormous.You get to choose which you will experience. Examine what Mr. Hoffer said:-

There are two obvious parts to his statement. The first part is very clear; how well it is understood is another subject.

“The learners will inherit the earth.”

I want to come back and elaborate on that statement because it is exciting, full of promise and possibility. However it would probably be wise to look at the second part of his advice first. Then, if you happen to fall into the category Eric Hoffer referred to, you can change your situation and win.

“The learned find themselves beautifully equipped to deal with a world that no longer exists.”

In virtually every country of the world you can find individuals, thousands of them, walking the streets with degrees in their hands…degrees from prestigious universities.

They cannot find work. Why?

These individuals view the conditions and circumstances that surround them as very frightening. They are the people who Eric Hoffer referred to who

“are beautifully equipped to deal with a world that no longer exists.”

Look around, the world is definitely changing, and it will never be the same again.

Power is slipping away, disappearing from some circles, and reappearing in others. Countries, companies and individuals who have held the power in the past are quickly losing it, if in fact, they have not already watched it melt in their hands.There often smug, sometimes selfish, domineering, complacent attitude has cost them dearly. They are confused and this confusion is frequently fueled by their own ignorance. When that happens it ultimately leads to anger or resentment – sometimes both.This negative energy is then quite frequently misdirected, possibly at their loved ones, which then causes an entirely new set of problems.These people are clutched by an unseen enemy and their frustration is endless because they are not sure what has happened or what is happening. Their world seems to be turning upside down.

The entire world is in the midst of a paradigm shift, which is unprecedented.

There have been transitions in the past but nothing to equal what we are presently experiencing. The world is moving from an intellectual to a spiritual vibration. The rules for winning have changed dramatically and the majority of the populations are still living with the old rules.There are an enormous number of people in every community who have worked hard and disciplined themselves to follow the only rules they know…still they are losing. They are bewildered, confused and in many cases, angry and most feel their anger is justified, whether it is or not matters little. They are doing what they were taught by their parents, teachers, and employers.

Unfortunately they too, were working with the old rules.

In the past, individuals were recognized and rewarded for what they knew.

Corporations waited on the sidelines dangling monetary rewards attempting to attract the graduates from the big name universities of the world. There were the multi-million dollar MBA management development programs that corporations placed their hope in for years.

Most everyone was conditioned to deify the intellect. Individuals were not properly recognized and rewarded for what they did.

Rather than focusing on what is or was wrong, we should let it go. Let the dead bury the dead. The world I grew up in is gone, forever. The world has changed. We live in the new era. This is a spiritual world governed by exact laws. Everyone who studies these laws and incorporates them into every aspect of their life will be richly rewarded.

I believe we would be wise to go back to the promise Eric Hoffer shared,

“In times of change, the learners inherit the earth.”

Contrary to popular belief, there is no such thing as an educated person. You are either learning or you are not.

“In times of change, learners inherit the earth, while the learned find themselves beautifully equipped to deal with a world that no longer exists.”
~ Eric Hoffer