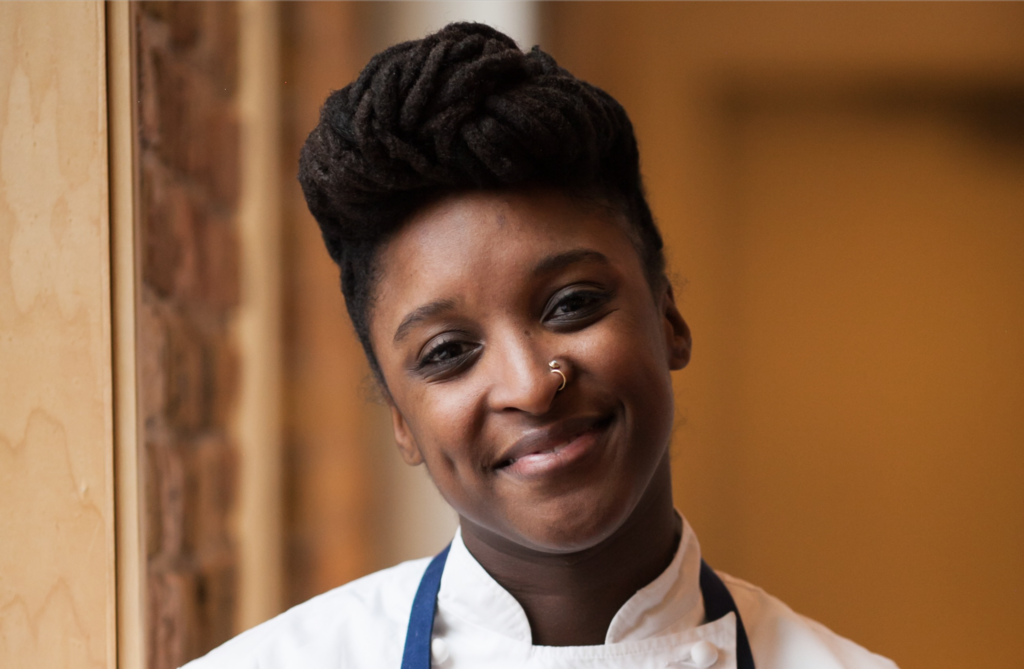 The Michelin Guide is one of the oldest guide books, published by the Michelin tire company first in 1926, rating restaurants and hotels. The Michelin star is a mark of excellence for restaurateurs and one of the highest honors a chef can receive.

Russell is an Ohio native who found her passion for cooking early in life. During high school, she enrolled in a culinary training program where she performed exceptionally well. She eventually moved on to culinary school, getting her first job as a line cook. She met Noah Sandoval, the owner of Kikko and Kumiko, when they both worked at another restaurant, Green Zebra. Sandoval went on to open several avant-garde restaurants including, Senza, a wheat-free restaurant which closed in 2014, and Oriole, an interactive upscale dining experience that runs customers about $215 per person. By the time Noah asked Russell to run a bar for him, she had already fallen in love with his inventive approach.

Kumiko found near instant success. The Japanese inspired dishes and omakase format were a hit with Chicagoans. Last summer, they separated the omakase tasting menu and a la carte drink and snack menus, making the tasting menu reservations-only, renaming that portion of the restaurant, Kikko. The omakase format of the bar means that everything is left up to Russell, including the dishes and ingredients served, and the alcoholic pairings, no substitutions. Every night, she greets the guests, encouraging them to ask questions about the food and reminding them to have a great time.

The day that it was announced that she would be receiving a Michelin Star, the team met at their restaurant Oriole and Chicago Tribune restaurant critic Phil Vettel made sure a photographer was present to capture the reaction. When the call finally came, Russell was elated, jumping up to embrace one of the investors, Joe Kaiser.

“It was very intense, but then it was like I was finally able to breathe, because I was so anxious that whole time. Just thinking how hard we have worked up until then, from before we opened to now – it’s been a lot,” Russell said.

Prior to the announcement of the Michelin award, Russell and her husband Garrett, Kumiko’s sous chef, had already discovered that there had never been a Black woman to win the honor, making the moment even more special. Still, the weight of the award is still a lot to bear.

“It has been a little overwhelming, like, ‘OK, everybody is definitely watching me now.’ Anybody that has a Michelin attached to their restaurant feels pressure, but then sometimes I feel like the fact that it’s then attached to ‘You’re the first Black woman to get a Michelin star’ makes it a spectacle. But it’s also very cool that people can come see me and we can hang out together for two hours,” Russell told Chicago Mag.

Kikko had an influx of customers after the announcement and they haven’t slowed down since. People are excited to come and see what the hype is all about but Russell just wants people to enjoy themselves, and more importantly, enjoy the food.

“I didn’t get here because I’m a Black woman. I got here because I work really hard, I’m passionate, and I’m good at it. I never got into this for stars. I just want to make really delicious food for humans to eat. The feeling you have when people make you good food and you’re with people you love to be around – it’s like nothing else. You just want to make people feel like they’re at home, or something like it,” she said.

Kikko and Kumiko is located at 630 W. Lake St., West Loop in Chicago, IL. To learn more about what they offer and to make reservations, visit their website here.

Congratulations Chef! You deserve the honor!