7 Principles of an Eagle

7 Principles of an Eagle

Eagles fly alone at a high altitude
and not with sparrows or mix with other smaller birds. Birds of a feather flock together. No other bird goes to the height of the eagle. Eagles fly with eagles. Never in a flock. Even when Moses (Old Testament Bible) went to commune with God on the mountain, he left the crowd at the foothills.

Moral:~ Stay away from sparrows and ravens.
Eagles fly with eagles.

Eagles have strong vision,
which focuses up to 5 kilometers from the air. When an eagle sites prey- even a rodent from this distance, he narrows his focus on it and sets out to get it. No matter the obstacle, the eagle will not move his focus from the prey until he grabs it.

Moral:~ Have a vision and remain focused no matter what the obstacle and you will succeed.

Eagles do not eat dead things.
He feeds on fresh prey. Vultures eat dead animals but not eagles.

Moral:~ Steer clear of outdated and old information. Do your research well always.

The Eagle is the only bird that loves the storm.
When clouds gather, the eagles get excited. The eagle uses the wings of the storm to rise and is pushed up higher. Once it finds the wing of the storm, the eagle stops flapping and uses the pressure of the raging storm to soar the clouds and glide. This gives the eagle an opportunity to rest its wings. In the meantime all the other birds hide in the leaves and branches of the trees. We can use the storms of our lives (obstacles, trouble, etc) to rise to greater heights.

Moral:~ Achievers relish challenges and use them profitably.

The Eagle tests before it trusts.
When a female eagle meets a male and they want to mate, she flies down to earth with the male pursing her and she picks a twig. She flies back into the air with the male pursuing her.

Once she has reached a height high enough for her, she lets the twig fall to the ground and watches it as it falls. The male chases after the twig. The faster it falls, the faster he chases until he reaches it and has to catch it before it falls to the ground, then bring it back to the female eagle. The female eagle grabs the twig and flies to a much higher altitude pursued by the male until she perceives it high enough, and then drops the twig for the male to chase. This goes on for hours, with the height increasing until the female eagle is assured that the male eagle has mastered the art of picking the twig which shows commitment, then and only then, will she allow him to mate with her!

Moral:~ Whether in private life or in business, one should test commitment of people intended for partnership. 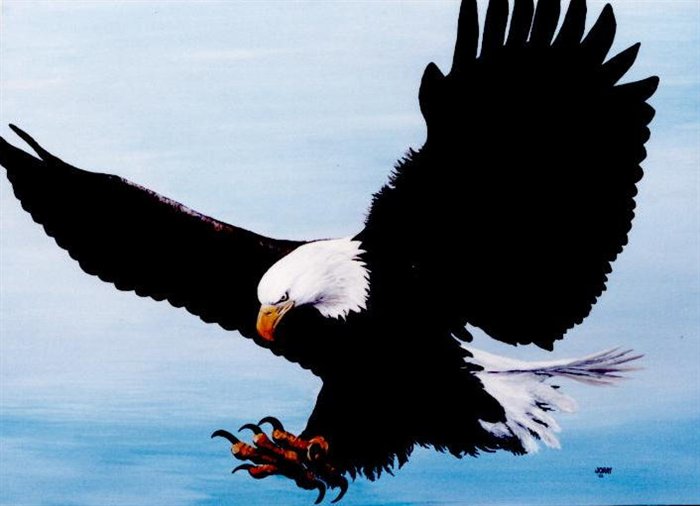 Moral:~ The preparation of the nest teaches us to prepare for changes;

Both male and female eagles participate in raising the eagle family. She lays the eggs and protects them; he builds the nest and hunts. During the time of training the young ones to fly, the mother eagle throws the eaglets out of the nest and because they are  scared, they jump into the nest again.

Moral:~ The preparation for the family teaches us that active participation of both partners leads to success;

Next, she throws them out and then takes off the soft layers of the nest, leaving the thorns bare. When the scared eaglets jump into the nest again, they are pricked by thorns. Shrieking and bleeding they jump out again this time wondering why the mother and father who love them so much are torturing them. Next, mother eagle pushes them off the cliff into the air.

Moral:~ That being pricked by the thorns tells us that sometimes being too comfortable where we are may result into our not experiencing life, not progressing and not learning at all. The thorns of life come to teach us that we need to grow, get out of the nest and love on. We may not know it but the seemingly comfortable and safe haven may have thorns;
As they shriek in fear, father eagle flies out and picks them up on his back before they fall, and brings them back to the cliff. This goes on for sometime until they start flapping their wings. They get excited at this newfound knowledge that they can fly and not fall at such a fast rate.

The father and mother eagle supports them with their wings.

Moral:~ The people who love us do not let us languish in sloth but push us hard to grow and prosper. Even in their seemingly bad actions they have good intentions for us.

When the Eagle grows old,
his feathers become weak and cannot take him as fast as he should. When he feels weak and about to die, he retires to a place far away in the rocks. While there, he plucks out every feather on his body until he is completely bare. He stays in this hiding place until he has grown new feathers, then he can come out.

Moral:~ We occasionally need to shed off old habits & items that burden us without adding to our lives…

“One should never direct people towards happiness, because happiness too is an idol of the market-place. One should direct them towards mutual affection. A beast gnawing at its prey can be happy too, but only human beings can feel affection for each other, and this is the highest achievement they can aspire to.” ~ Aleksandr Solzhenitsyn